What does it take to run a half marathon?

Getting ready to run the distance

I live about 14km from the office and travel to work by car every day.

I wouldn’t dream of setting off on foot each morning to walk or run to work.

Yet, on Saturday April 20, I’m going to join thousands of other runners who will cover one-and-a-half times that distance as they tackle the Old Mutual Two Oceans Half Marathon. And of course there are those who will be hitting the road with the goal of covering four times that distance (56km) in the ultra marathon which marks its 50th running this year.

As a novice runner, I’m leaving nothing to chance – and in addition to physical training, I’m also filling up on knowledge about nutrition, strength training and the importance of rest, which I’ll be covering in a series of blog posts.

An integral part of my preparation is the structured, scientifically formulated OptiFit training programme run by the Sports Science Institute of South Africa (SSISA).

The nine-week programme includes not only three days of running every week – with a long run on the weekend – but also specific days dedicated to strength training, cross training and rest.

SSISA’s Kathy McQuaide, who has years of running experience and acquired knowledge, says it’s important to focus on a gradual progression in one’s training, balanced nutrition and factoring in adequate rest and recovery.

When I ran my first 10km race in December last year, I started struggling around the 8km mark and tried to engage in some self-motivation. But when my running mate heard me saying: “Come on, legs! Just keep going”, her response, to me was simple: “Your legs know what to do. It’s your mind you need to convince.”

And I’m guessing that anyone who has taken on a major challenge, will understand the point I’m going to make next – achieving one’s goal requires not only physical strength, but significant mental investment as well.

Former American President Franklin D Roosevelt advised that: “When you come to the end of your rope, tie a knot and hang on”.

In an article titled “10 critical things every runner should know”, which Kathy co-authored, the writers note: “You might well reach this point in your OMTOM run and is there a way that you can actually get mentally stronger? First get your mind right. Remember your mind and body are so well connected that to achieve optimally – you need to have a positive mindset.”

They also suggest coming up with mantras you can repeat to yourself if you start to struggle, or to think about the solid training and ample preparation you put in ahead of the race. 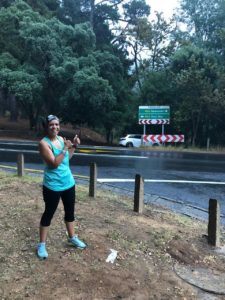 Here I am at the top of Southern Cross Drive, one of the steep climbs along the Two Oceans route.

Kathy adds that it helps to know the race route and to “test drive” your kit.

“When doing your long runs – use them as practice for the race.  Start at the time you will start OMTOM 21.1km. Eat or drink what you plan to have before the race – and even wear your gear to get used to the fit and to see if you chafe,” she says.

And on that note… What you wear on race day has the potential to impact on your performance – and enjoyment of the race – so make sure that you’re comfortable.

Getting the correct shoes is critical

“There are all sorts of items runners can use but really the most important are shoes,” adds podiatrist Chris Delpierre.

“Choosing the best can be really complicated but in the beginning it’s really all about comfort. Go to a reputable running shoe shop, take your time and choose the shoe that you feel fits the best. It may be that as you progress you may need something a bit more specific but go with comfort in the beginning.”

Asked about the assessments he does with runners, Chris says, “A running podiatry consultation will deal with several issues, trying to find the optimum set-up for each runner based on their foot shape and running biomechanics.

“We would look out for hip, knee and foot positions during the running cycle to try and assess where injuries are likely to occur and what can be done to prevent them.

“Many running problems are worse at the beginning of a running career. As muscles become conditioned many of the niggles disappear. As a new runner, patience is the key. It can take three to six months for muscles to become accustomed to the unique strain running places on our joints.”